Overcoming logistical restraints to design and build a low noise chiller on the roof top of a Luxury London Hotel.

A luxury high end hotel situated in Southampton Row, London, near the British Museum, has had an additional floor added at roof level for multiple penthouse suites as part of a multimillion pound refit. During the refit executive rooms were also added in the basement which required air conditioning served by a new water chiller.

Hockey Building services were the main mechanical contractor on the project and having already worked with CoolTherm on an equally challenging hotel chiller installation were confident CoolTherm were ideally placed to develop a solution to meet their needs.

Significant logistical challenges due to the location of the building, meant the only place for the new chiller to be positioned was on the roof of the building adjacent to the penthouse suites. Due to the sensitivity of the location, the machine had to be ultra low noise when operating.

The building is land locked, surrounded by busy roads on all four sides making it impossible to use a crane to position the plant. One of the quieter side roads to the rear of the building (which could have supported a crane) is used as an emergency route by ambulances serving the local Great Ormond Street Hospital. Therefore, a solution to create an air cooled chiller which was completely demountable where the components could be manually carried to the roof was needed.

CoolTherm’s Sales Engineer Sean O’Grady developed a solution with Geoclima whereby the sizable bespoke chiller (including fully hydraulic pack) could be broken into handballed sections. There could be no compromise on performance or efficiency with the final design.
CoolTherm dispatched one of their specialist in-house project chiller installation teams to rebuild the chiller to operational condition in only three days on site, which coincidently happened to be the three hottest days of 2018.

Once installed the chiller was commissioned into operation and the sound levels were tested, with the noise produced falling below the required maximum level of 51dB(A) @ 10 meters. This was achieved by using custom ‘in frame’ acoustic enclosures combined with scroll acoustic compressor hoods, low pressure drop condenser coils, and EC condenser fans running at a reduced speed but employing adaptive extreme ambient fan speed control, to ensure dependable chiller operation through extreme weather events such as the summer of 2018. 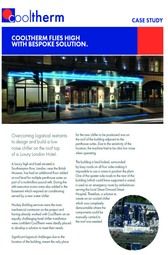